A History of the College Terrace Houses

Students researched the history of over 50 different Williamsburg houses built prior to 1940. This research included scouring real estate websites, the county property information websites, and digging through past deeds at the county clerk's office in the Williamsburg-James City County courthouse. The houses on College Terrace, adjacent to the William and Mary campus, had particularly interesting histories. Below is a timeline for one of these properties, tracing out its history alongside major legal developments related to race and home ownership. Click on any of the census or deed images for larger versions of the document.

Samuel F. Bright purchases and expands New Hope, a roughly 600-acre property bordering the west side of the College. For an excellent history of the Brights and their Williamsburg property, see this archeological assessment prepared by the the William and Mary Center for Archaeological Research for the Lemon Project and the College of William and Mary.

In the 1860 federal population census, we find the Bright family living in Williamsburg. Samuel F. Bright still has sizable land holdings, with $12,000 in real estate wealth. Both Samuel F. Bright and his son Robert A. Bright have extraordinarily large personal estates of at least $30,000 in 1860 dollars, an equivalent of between one and fifteen million dollars today (Measuring Worth).

Much of this personal estate wealth is in the form of slaves. Here we see the slave holdings of Samuel F. Bright enumerated in the 1860 federal census slave schedules. Additional slaves owned by Samuel and Robert appear on other pages of the slave schedules, working on other parcels of land or being hired out to other individuals. 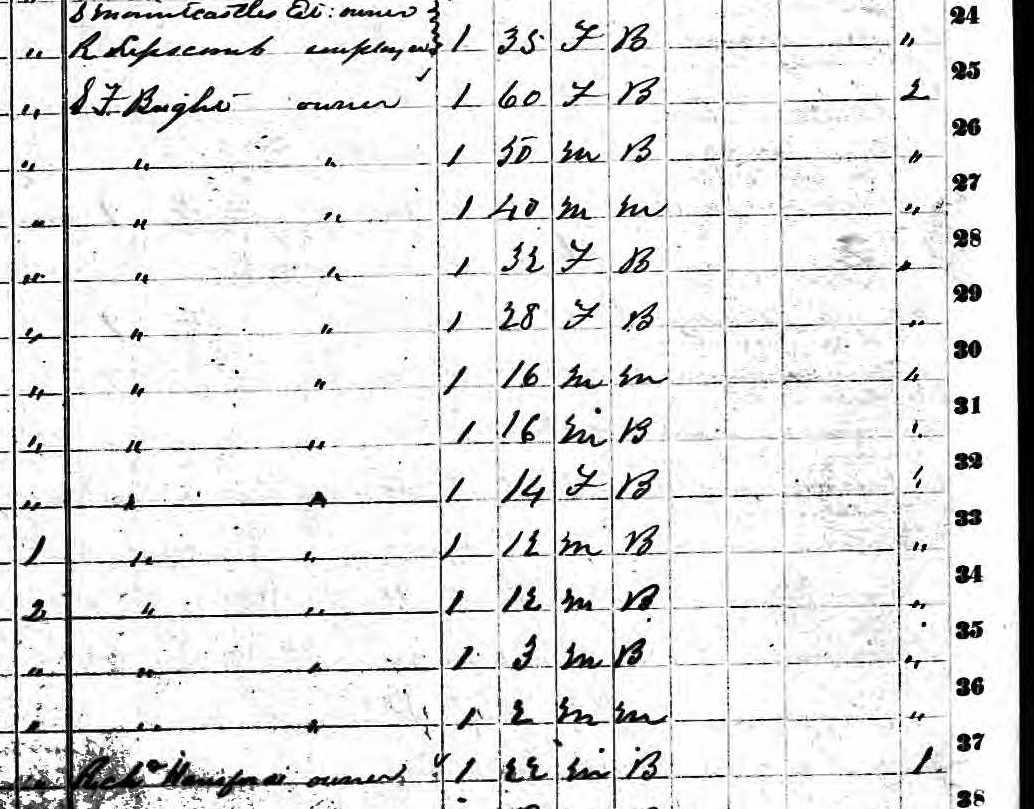 Robert A. Bright, now the owner of the land that will be College Terrace, transfers the property to William Morecock. The land was placed in a trust to protect it from Robert's father-in-law's creditors. 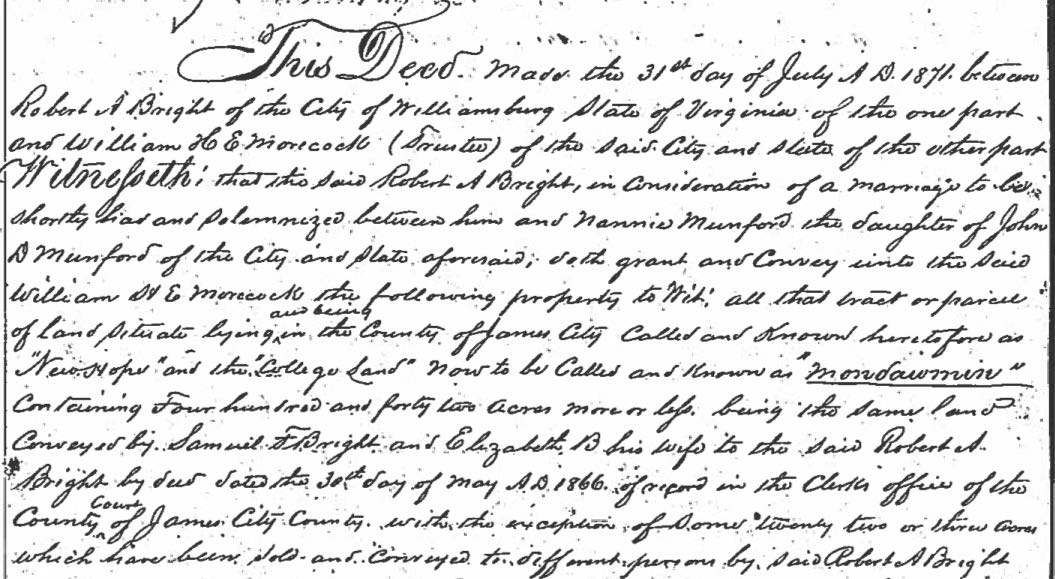 The United States Supreme Court rules civil government-instituted residential racial segregation unconstitutional in Buchanan v. Warley. The court finds that Louisville's ordinance restricting the sale of residential property on the basis of race deprives individuals of their property without due process of law.

The Supreme Court dismisses any constitutional grounds for challenges to racially restrictive covenants with the Corrigan et al. v. Buckley decision. In the decision, the Court argues that,``the prohibitions of the Fourteenth Amendment `have reference to state action exclusively, and not to any action of private individuals.''' This ruling leads to expanded usage of racially restrictive covenants throughout the country. 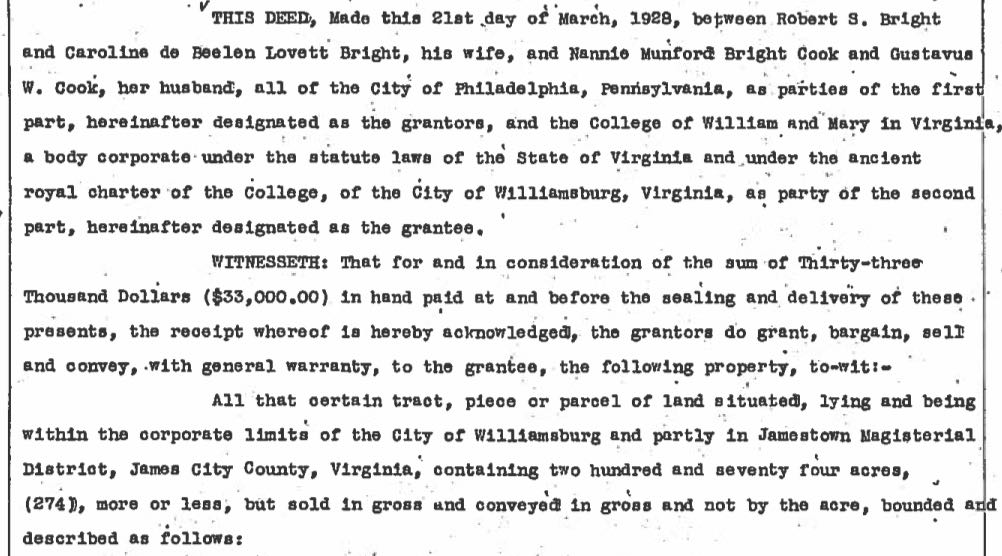 The College of William and Mary develops the land acquired from the Brights. Here we see a parcel being sold to the Epsilon Iota House Corporation by the College, with President J.A.C. Chandler signing off on the sale. This is the deed that established restrictions on the use of the land. Two restrictions are particularly noteworthy. Number 4 maintains the College's interest in the nature of future improvements, requiring any building to be approved by the architect of the College of William and Mary. Immediately following this restriction comes a restriction on who may reside on the property: the College mandates that no lot in College Terrace may be sold to any person or persons of African descent at any time within fifty years from the date thereof. But for the intervention of the courts, this bars African Americans from College Terrace until 1982. 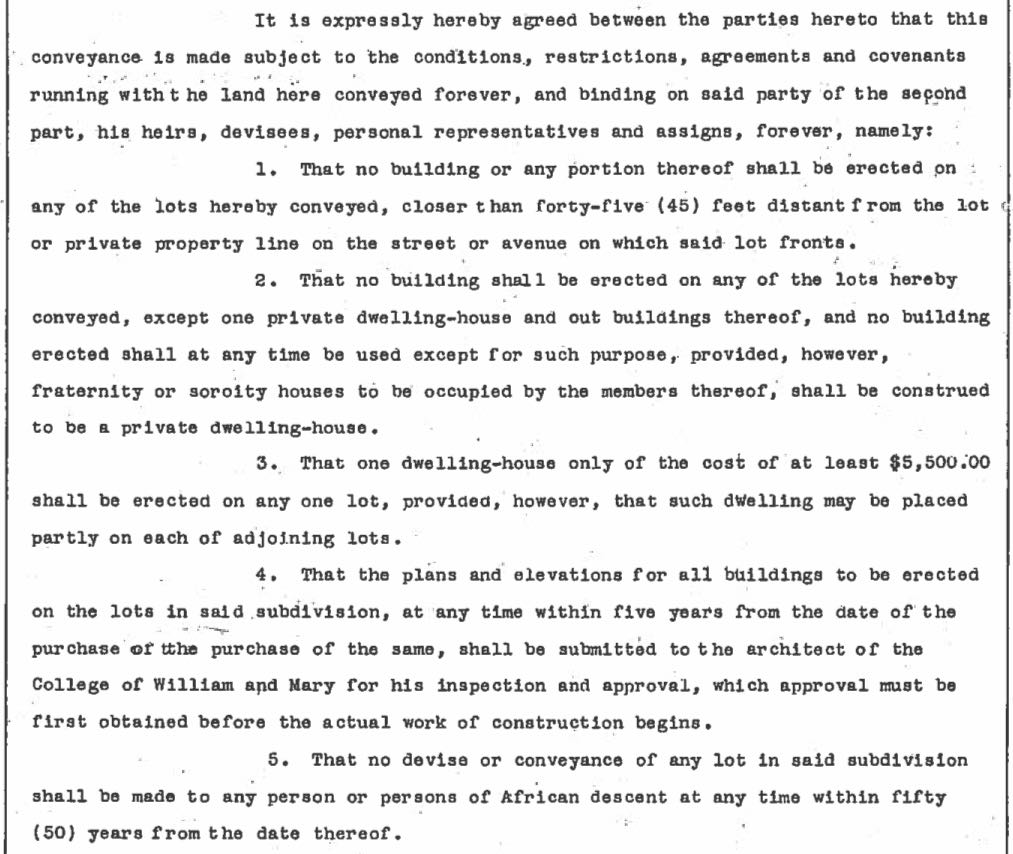 At this point, the property on College Terrace has passed through multiple owners and has become a private residence, no longer property of the College or of fraternities associated with the College. Here we have the property being transferred from William and Nannie Merrymon to Giles and Ida Carpenter. Note that the restrictions from 1932 are explicitly included in this new deed. As before, any building plans must be approved by the architect of the College of William and Mary and no lot may be sold to any person or persons of African descent for fifty years. Now, without intervention of the courts, African Americans are barred from College Terrace until 1998. 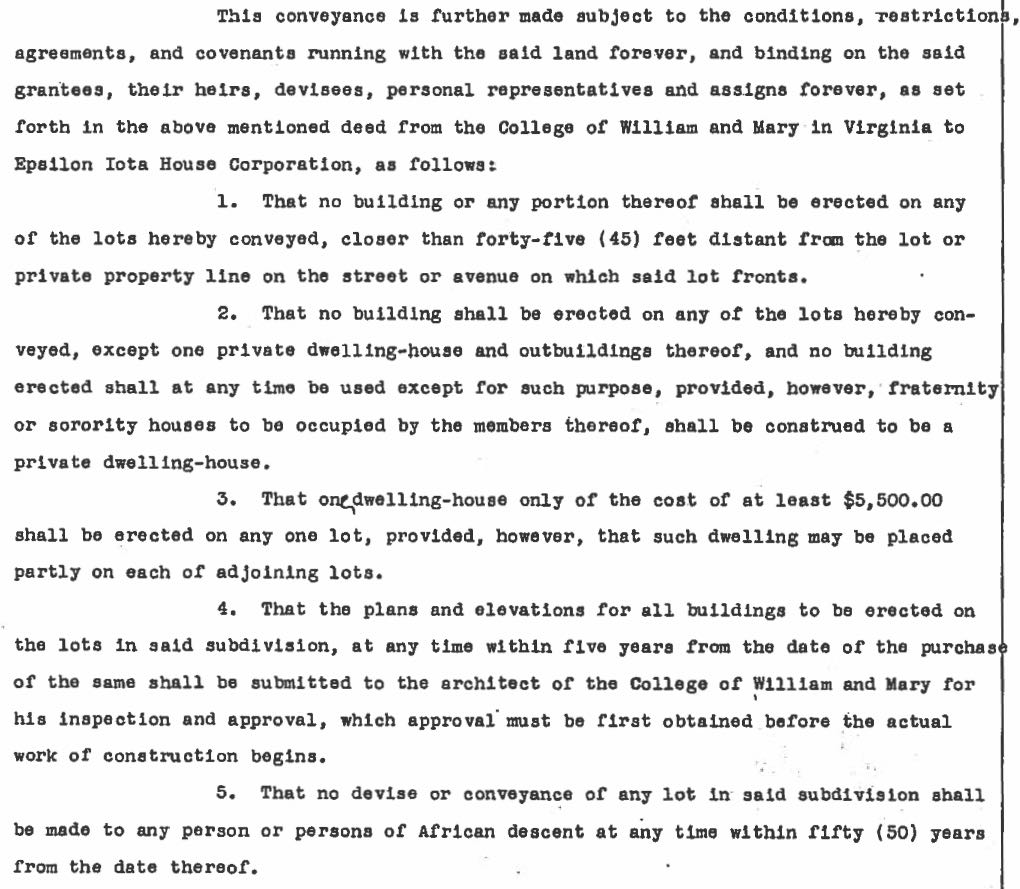 In Shelley v. Kraemer, the United States Supreme Court rules that the Equal Protection Clause prohibits racially restrictive housing covenants, making those covenants unenforceable in court. From the majority opinion: ``These are not cases, as has been suggested, in which the States have merely abstained from action, leaving private individuals free to impose such discriminations as they see fit. Rather, these are cases in which the States have made available to such individuals the full coercive power of government to deny to petitioners, on the grounds of race or color, the enjoyment of property rights in premises which petitioners are willing and financially able to acquire and which the grantors are willing to sell.'' 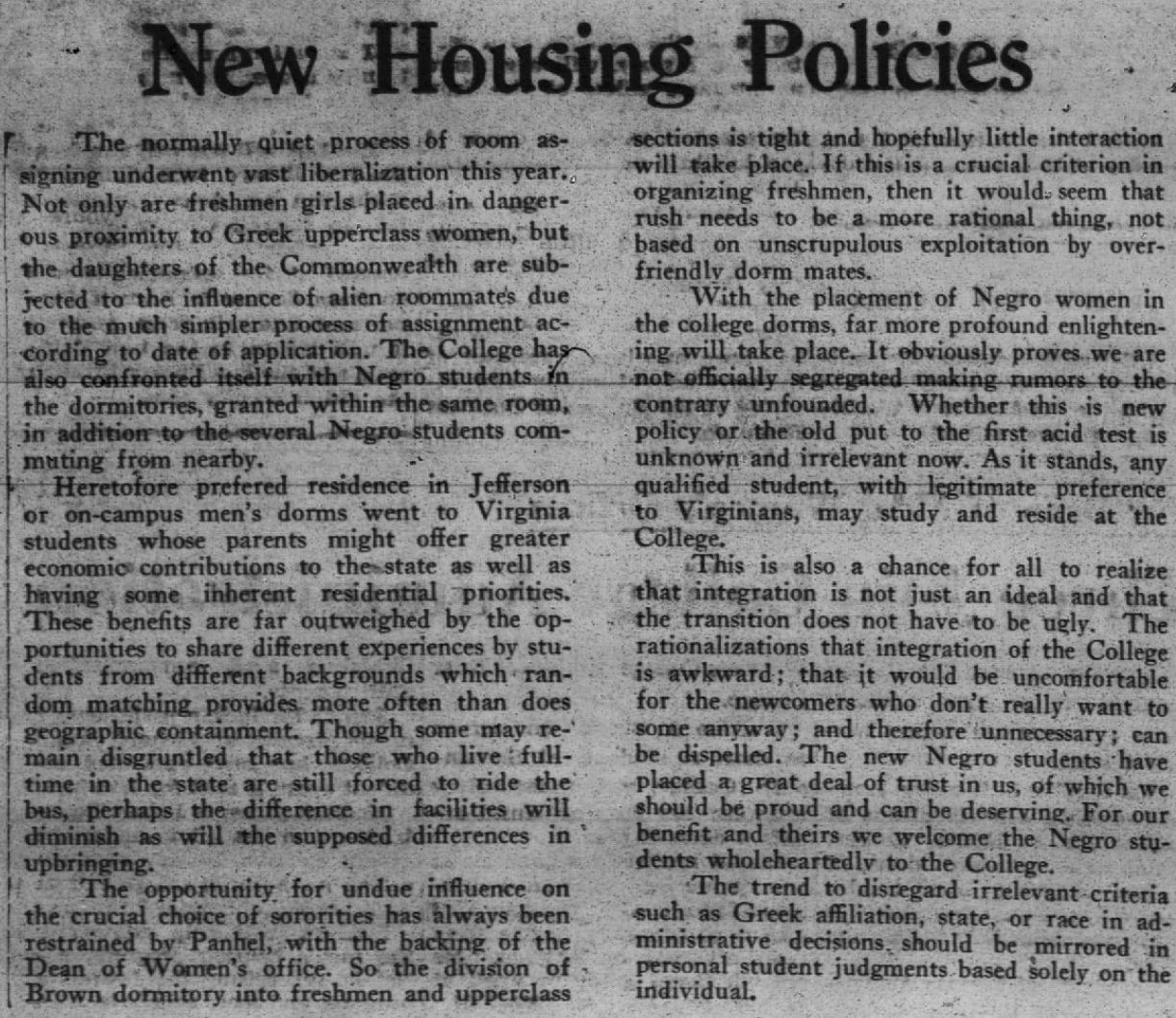 The Fair Housing Act (Titles VIII and IX of the Civil Rights Act) prohibits refusal to sell or rent housing to any person on the basis of race, color, religion or national origin. While racially restrictive covenants were ruled unenforceable in 1948, this act outlaws them. Note that several of the restrictive covenants found by Econ 449 students in Williamsburg were written into deeds in the 1950s, well after Shelley v. Kraemer had been decided. 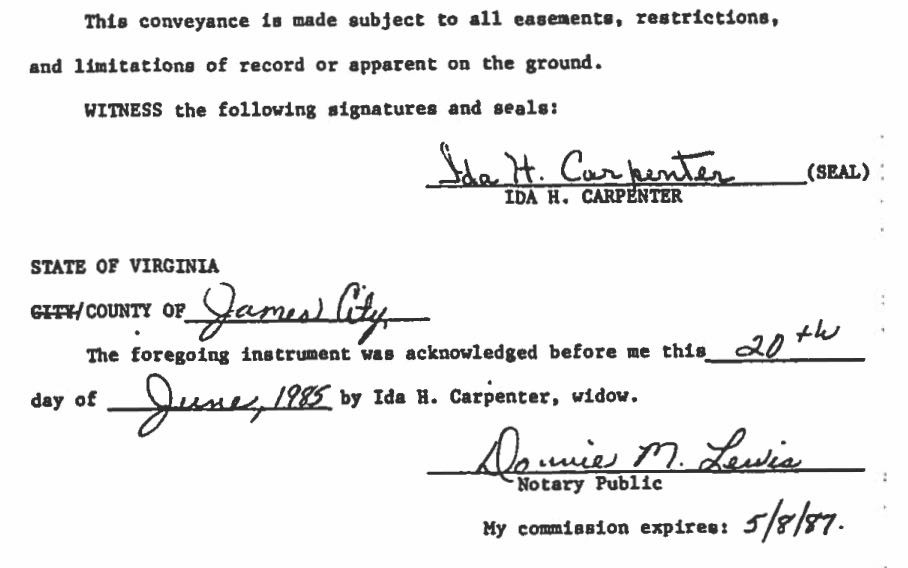